Today the recently-formed ‘tender design team’ met at Ruddington to establish the design requirements for a new tender tank.

The existing tank is the original and is now life-expired, being heavily corroded at the bottom.

The obtaining of brand new fabricated (= welded steel) tender tanks has become fairly commonplace in recent years with numerous preserved and new-build locomotives having had the treatment.

As part of this exercise the Trust’s Engineers will be making certain design modifications to improve the ergonomics and maintainability of the locomotive, as well as making provision for emerging signalling technology in the form of the ‘European Train Control System’ (ETCS), which is a system of ‘in cab’ signalling and control set to be gradually rolled-out across the UK National Network. The Trust won’t be ‘going it alone’ in that regard, it will be keeping a close eye on work currently being undertaken to fit ETCS to LNER Peppercorn A1 4-6-2 no. 60163 ‘Tornado’, and LMS Stanier ‘Black 5’ 4-6-0 no. 45231 ‘The Sherwood Forester’, whilst looking at the lessons learned from the recent fitment of modern electrical equipment on other mainline-registered locomotives such GWR King Class 4-6-0 no. 6024 ‘King Edward I’. The challenge will be to keep it as simple and rugged as possible. Suffice to say, sensitive modern electronics are not an easy bedfellow of rugged steam locomotive technology!

Leading the tender design team is Alistair Leach, a Chartered Mechanical Engineer whose day job is in the railway industry, working alongside Tony Stockman, who will be doing the 3D Computer Aided Design (CAD) using ‘Solidworks’ software. Tony has already modelled in CAD a B1 tender for a 7.25″ gauge model of a B1 that he is building, although for 1264’s new tank it is likely that he will start from scratch because he will have to take into account the availability of modern steels which are in metric rather than imperial sizes.

In order to ensure that the new tender tank will ultimately be approved by the relevant authorities for use on the UK mainline, we will be engaging with third party technical assurance specialists in due course to ‘shadow’ the design and construction work.

Practical experience from the last 25 years of operating 1264 will also be fed into the design by the Trust’s Engineers, Steve Andrews and Steve Robb. 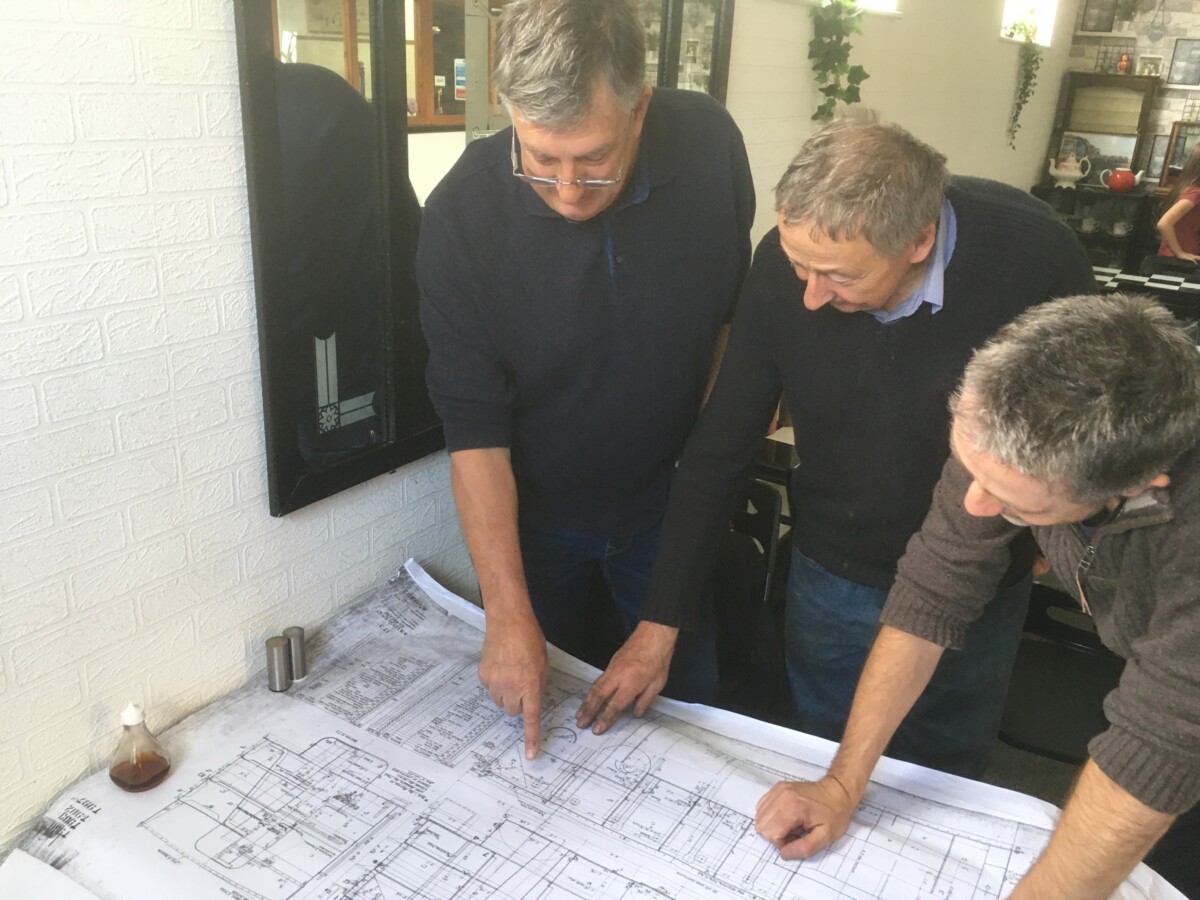 Trust Engineers Steve Andrews, Alistair Leach and Tony Stockman pour over an original drawing of a B1 tender, albeit there were thought to be three different variants, and some work must first be undertaken to establish which drawing 1264’s tender was actually manufactured to! 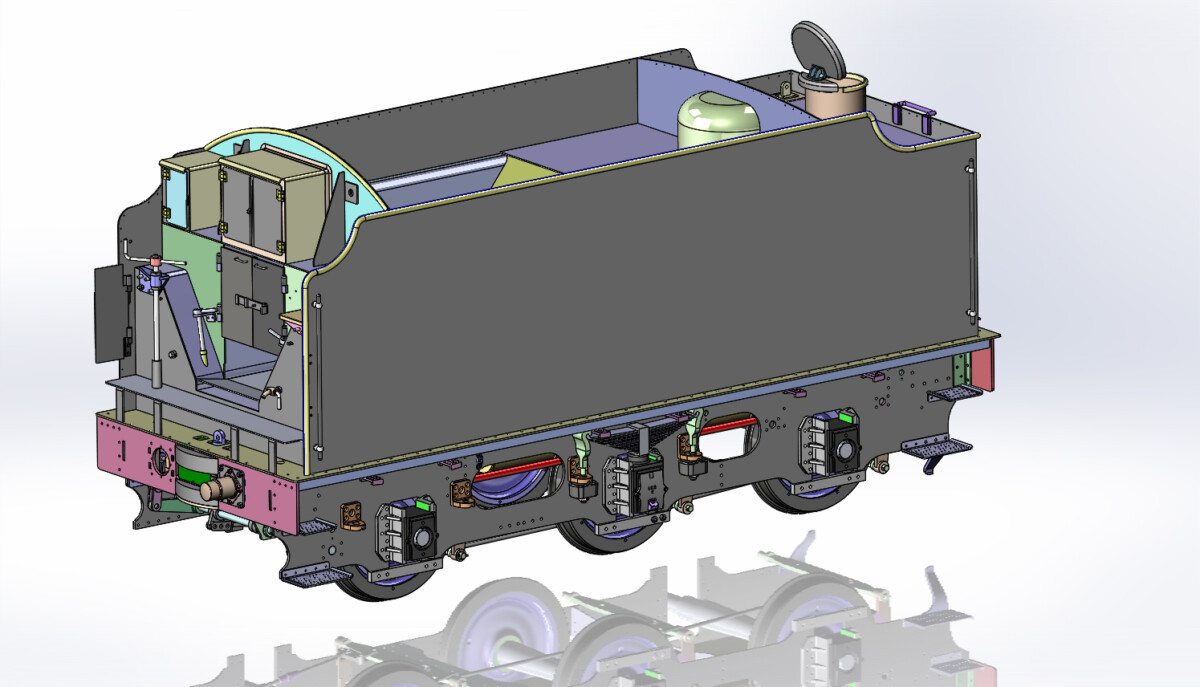 Sample images (above and below) of Tony Stockman’s B1 tender modelled in 3D CAD programme ‘Solidworks’. This is not an exact rendering of how our new tender tank will ultimately look; there are likely to be subtle design modifications, as described above, such as additional cabinets for electrical equipment. 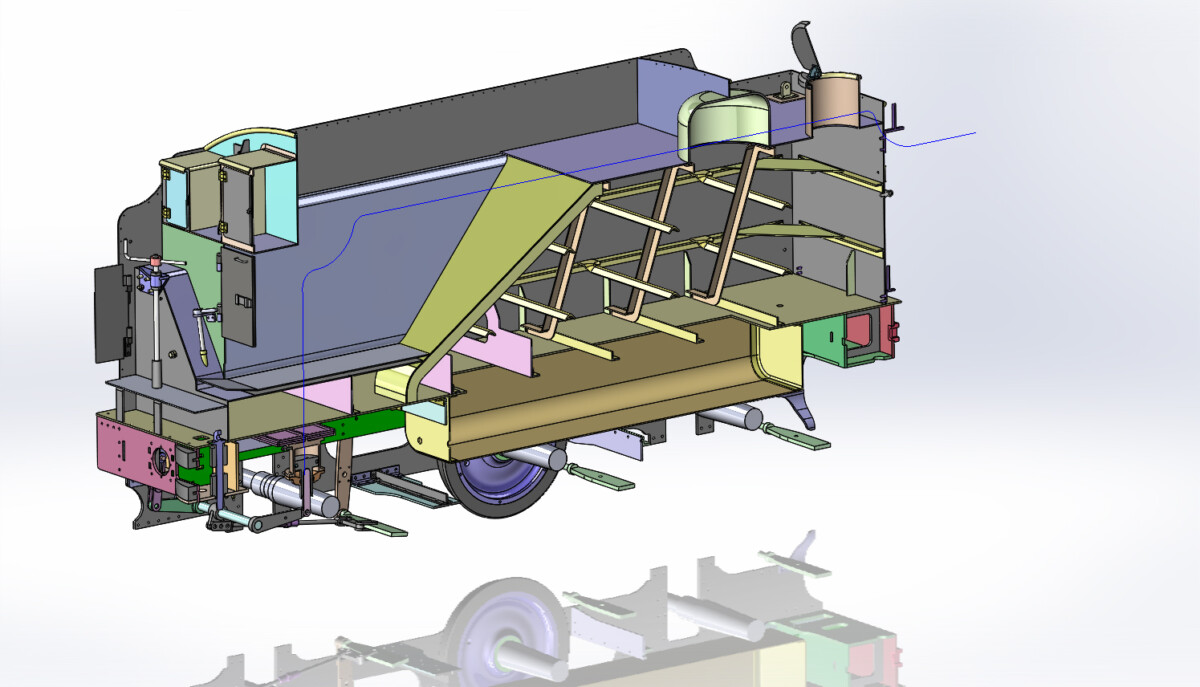